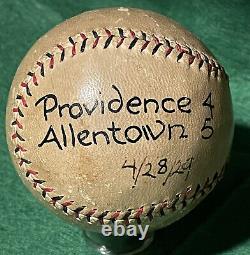 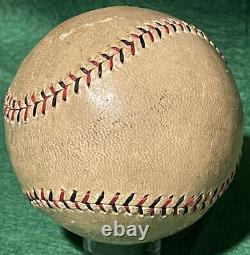 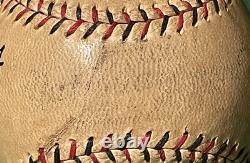 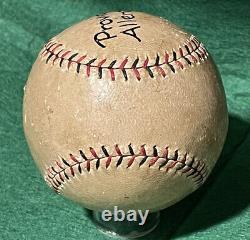 Offered is an official 1928-29 National League (Heydler) Spalding baseball used in an Eastern League baseball game. The ball was used in a game between the Allentown Dukes and the Providence Greys. Dukes won the game dated April 28, 1929.

Here is an excerpt from the article about the contest. ALLENTOWN WINS ON WALK IN NINTH. Evans Forces Run Across as Grays Lose, 5 to 4.

Sheriff Harris Connects for Home In Fourth Inning. GAME AT ALLENTOWN IN RAIN WATCHED BY 5000. With the bases filled In the ninth Inning, two down and the score tie at 4 to 4, Evans, relief pitcher for Provldence, walked Ed Sperber to force In the winning run and give Allentown a 5-to-4 victory over the Grays In their Eastern League game this afternoon.

Despite a continual drizzle, which fell throughout the game and forced the postponement of the scheduled second game, close to 5000 fans turned out for the first Sunday league game. Sheriff Harris, Providence outfielder, hit the first home run of the season on a terrific drive into deep center field in the fourth inning. Sperber ended up playing for the Boston Braves from 1924-25, while Dave "Sheriff" Harris played seven seasons for the Braves, White Sox and Senators. This item is in the category "Sports Mem, Cards & Fan Shop\Game Used Memorabilia\Baseball-MLB\Baseballs". The seller is "fredskinz" and is located in this country: US.