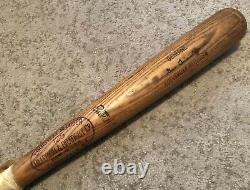 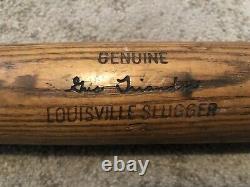 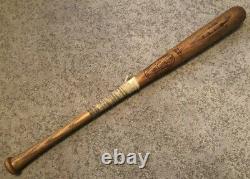 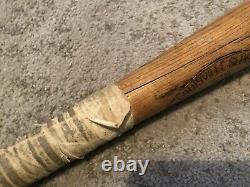 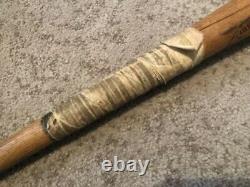 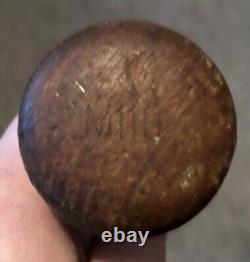 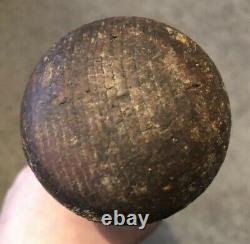 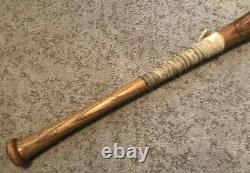 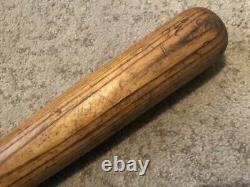 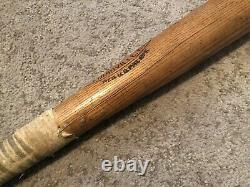 Up for sale we have a 1950s Gus Triandos Game Used Louisville Slugger Baseball Bat Baltimore Orioles. This Tough bat to find has a handle crack thats been repaired with bat boy nails and a vintage tape job. Cleats marks on barrel end and show tremendous use.. No provenance to the bat as it was bough from an estate. Born in San Francisco, California, Triandos was signed by the New York Yankees as an amateur free agent in 1948. [2] He joined the Yankees' major league roster briefly as a 22-year-old in 1953, but was sent back to the minor leagues in 1954.

Triandos was traded to the Baltimore Orioles in 1955 where he played mostly as a first baseman for his first two years with the team, before becoming the Orioles' regular catcher in 1957. As the Orioles' catcher, he used an outsized catcher's mitt designed by manager Paul Richards to handle the unpredictable knuckleball of Hoyt Wilhelm. [3] Triandos was behind the plate when Wilhelm threw a no hitter against the New York Yankees on September 20, 1958, and also scored the only run of the game when he hit a home run in the eighth inning. [4] Triandos said catching for Wilhelm was incredibly taxing, telling a reporter, Wilhelm nearly ruined me. Although perhaps the slowest runner in the league, Triandos once hit an inside-the-park home run.

[5] As of 2007, he also holds the record for the most consecutive games without being caught stealing, 1,206. That accounts for his entire career, in which he had exactly one stolen base. [6] That stolen base came on September 28, 1958, the last game of the season, at Yankee Stadium, off rookie pitcher Zach Monroe and catcher Darrell Johnson[7]. Triandos had his best year in 1958, when he hit 16 home runs by mid-season to earn the starting catcher's role for the American League in the 1958 All-Star Game, breaking Yogi Berra's eight-year stranglehold on the position. [8][9] He ended the season leading all American League catchers in putouts with 698, and tied Berra's American League record of 30 home runs by a catcher.

[3][10] In 1959, he hit 20 home runs by mid-season and was again selected to be the starting catcher for the American League in the 1959 All-Star Game, However, a hand injury meant that he only had 25 home runs for the entire season. 169 in 63 games and was traded to the Detroit Tigers at the end of the year. As the Phillies' catcher, Triandos caught Bunning's perfect game against the New York Mets on June 21, 1964, thus becoming the first catcher in Major League history to catch no hitters in both the American and National Leagues. He played in his final major league game at the age of 34 before being released by the Astros on August 20, 1965.

Please thoroughly review all photographs. PLEASE READ TERMS OF SALE. Questions Are typically answered within as soon as possible , usually within 12-24 hrs. I strive to take excellent photos and give an unbiased description of the item. The item "1950s Gus Triandos Game Used Louisville Slugger Baseball Bat Baltimore Orioles" is in sale since Monday, April 1, 2019. This item is in the category "Sports Mem, Cards & Fan Shop\Game Used Memorabilia\Baseball-MLB\Bats". The seller is "detroitsportsantiques" and is located in Commerce Township, Michigan.