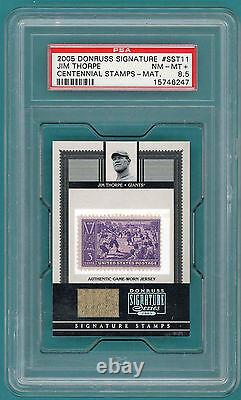 This lot features the 2005 Donruss Signature Jim Thorpe Game Used Jersey - #SST11 PSA 8.5! Considered one of the most versatile athletes of modern sports, he won Olympic gold medals in the 1912 pentathlon and decathlon, played American football (collegiate and professional), and also played professional baseball and basketball.

He lost his Olympic titles after it was found he was paid for playing two seasons of semi-professional baseball before competing in the Olympics, thus violating the amateurism rules that were then in place. In 1983, 30 years after his death, the International Olympic Committee (IOC) restored his Olympic medals. Thorpe grew up in the Sac and Fox Nation in Oklahoma.

He played as part of several all American Indian teams throughout his career, and "barnstormed" as a professional basketball player with a team composed entirely of American Indians. From 1920 to 1921, Thorpe was nominally the first president of the American Professional Football Association (APFA), which would become the National Football League (NFL) in 1922. He played professional sports until age 41, the end of his sports career coinciding with the start of the Great Depression. Thorpe struggled to earn a living after that, working several odd jobs. Thorpe suffered from alcoholism, and lived his last years in failing health and poverty.

In a poll of sports fans conducted by ABC Sports, Thorpe was voted the Greatest Athlete of the Twentieth Century out of 15 other athletes including Muhammad Ali, Babe Ruth, Jesse Owens, Wayne Gretzky, Jack Nicklaus, and Michael Jordan. Heres a great looking example of his 2005 game used card here.

This beauty has 4 razor sharp corners, 4 exceptional borders and a blazing surface with full gloss, color and clarity. The reverse is crisp and clean with pack fresh background color, near perfect centering and no marks or blemishes of any kind. Payments go out next day, checks held 5 days. The item "2005 Donruss Signature Jim Thorpe Game Used Jersey #SST11 PSA 8.5 Giants POP 1" is in sale since Friday, April 8, 2016.