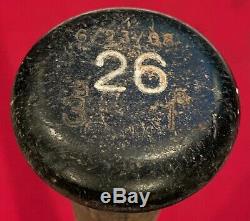 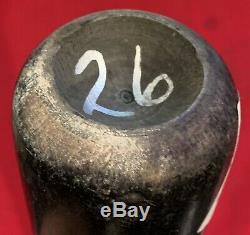 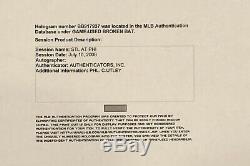 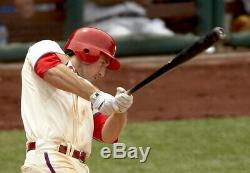 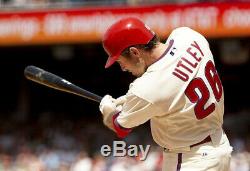 This listing is a fantastic 2008 Chase Utley Philadelphia Phillies Game Used Photomatched Marucci Baseball Bat. The bat exhibits a good amount of usage with ball marks, dirt on the barrel, and does exhibit mild cracks. The bat features Utley's #26 on the knob and barrel end. The bat includes a MLB authentication sticker and letter dating its use to July 10, 2008 in which Utley and Phillies faced the St Louis Cardinals. Chase hit a home run 3 games early on July 7th, and given the usage on the bat, it is likely that Chase hit that home run with this gamer, although I could find images form this game. The bat does match up to photos from this game, specifically the ball marks in the image with Chase facing chest forward, and the dirt on the barrel on the image of Chase from the back. A fantastic gamer from this Phillies legend, who would go on to win the World Series about three months after using this bat.

The item "2008 Chase Utley Philadelphia Phillies Game Used Photo Matched Baseball Bat" is in sale since Tuesday, September 22, 2020. This item is in the category "Sports Mem, Cards & Fan Shop\Game Used Memorabilia\Baseball-MLB\Bats". The seller is "vintagepigskin" and is located in Media, Pennsylvania.