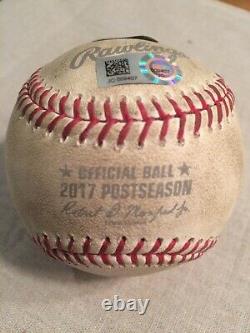 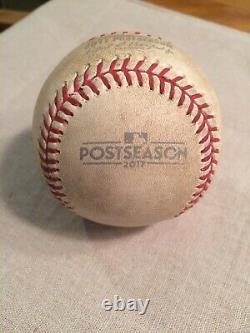 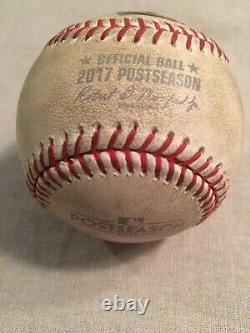 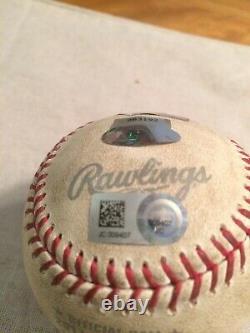 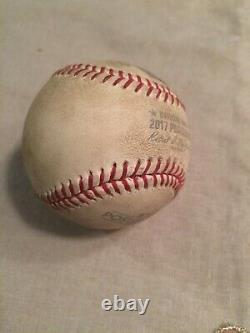 OWN A PIECE OF ASTROS and YANKEES HISTORY! Baseball actually used in an American League Championship Game!

Yankees won the game 5-0 to lead the series 3 games to 2. The Astros would go on to win this ALCS series in 7 games (becoming the first team ever to win both a National League and an American League Championship)....

And then go on to win the 2017 World Series. The only World Championship in Astros history. Winning Pitcher = Masahiro Tanaka. Losing Pitcher = Dallas Keuchel. Also has Steiner and Fanatics stickers.

Authentication documentation states it is a game used ball, but is not identified to any specific at bat or play. Unspecified play game used ball.

A rare opportunity to add an ALCS game used ball from this historic series to your baseball collection. Only a small quantity of used baseballs are released for sale to the public.

This ball from used in a game at Yankee Stadium makes a great gift for any Yankees or Astros fan. These special postseason game balls were used from 2012 until 2019, with the year of the series on the ball. In 2020, no special postseason balls were used in the wildcard, DS, or LCS games - regular season baseballs were used. The item "2017 CHAMPION HOUSTON ASTROS ALCS GAME USED BALL GAME 5 @ YANKEE STADIUM" is in sale since Tuesday, October 27, 2020. This item is in the category "Sports Mem, Cards & Fan Shop\Game Used Memorabilia\Baseball-MLB\Baseballs".