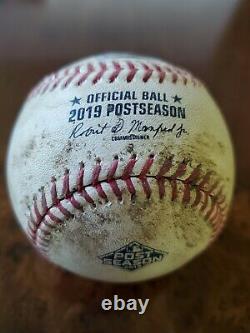 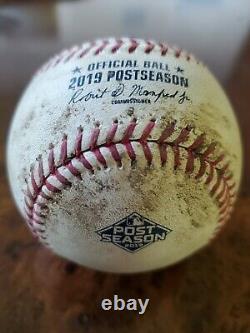 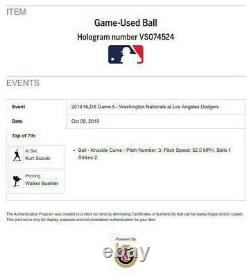 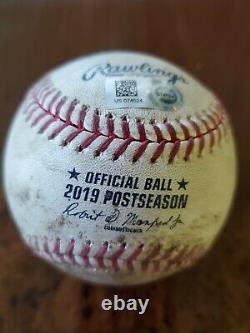 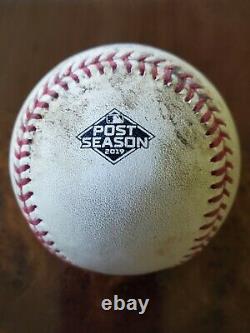 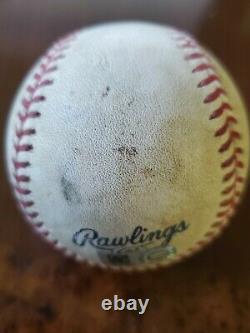 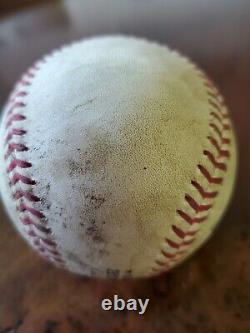 This is a game used baseball from the historic Game 5 winner in the final game of this NLDS that finally moved the Washington Nationals from the NLDS to the NLCS. This particular ball was pitched by Los Angeles Dodgers ace pitcher Walker Buehler to catcher Kurt Suzuki in Buehler's final inning of work in the 7th inning as he was pulled as his pitch count soared. Suzuki worked him past 100 pitches and this ball was the actual ball pitched for the 100th pitch by Buehler in the game. The ball hit the dirt and was taken out of play. For those who don't remember, Buehler pitched brilliantly and had a 3-1 lead until he was relieved by Clayton Kershaw who gave up two solo home runs to Anthony Rendon and Juan Soto to tie the game.

The game then went into extra innings and Howie Kendrick hit a grand slam in the 10th inning as the Nats of this game that won the series to move on to the NLCS. It was the first series win in Nationals history. The pitch Buehler threw was his infamous knuckle curve and you can see his grip marks near the laces and you might remember the next pitch #101 hit Suzuki in the face! This ball is MLB Authenticated and guaranteed by their authenticity of their numbered hologram.