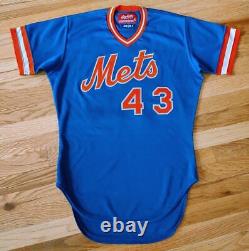 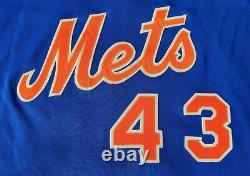 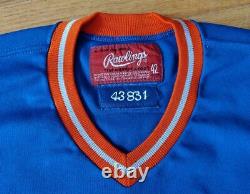 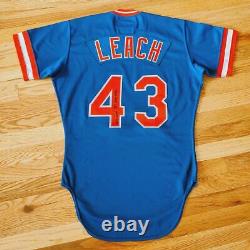 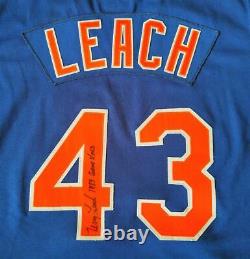 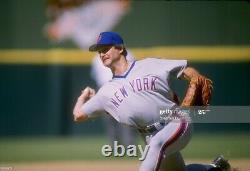 RARE 1983 NEW YORK METS GAME USED BLUE ALTERNATE HOME JERSEY ISSUED TO RELIEF PITCHER TERRY LEACH #43 OUTSTANDING USE; AUTOGRAPHED & INSCRIBED "1983 GAME USED". Leach pitched for the Mets from 1981 through 1989, with his best years coming in 1987 (filling in as a starter, he won 11 games to just a single loss) and 1988 (where he went 7-2 and pitched 5 scoreless innings in the post season). He posted a career W-L record of 38-27, with 331 strikeouts and a 3.15 ERA. He won his second career World Series Championship with the 1991 Twins.

The jersey is a royal blue v-neck pull-over, with orange and gray alternating stripes on the neckline and sleeve endings. The classic script Mets logo is sewn across the chest in orange and gray tackle twill lettering; beneath the team logo is Leach's # 43 sewn on in the same 2 colors. The back of the jersey features a large #43 sewn across the center in orange and gray tackle twill lettering. Above the number is the name LEACH sewn onto a nameplate that is affixed to the jersey. This nameplate is a professional restoration, as the original one was stripped off before the jersey was worn in the minor leagues (a common practice of the Mets until 1985).

The jersey is also autographed by Terry Leach on the back number; he also added the "1983 Game Used" inscription. An altogether fantastic jersey that is nearly 40 years of age but still remains in great condition.

A rare one too, as it was only a style worn sparingly for 1 year. There are not many of these in circulation! The item "RARE 1983 BLUE ALTERNATE TERRY LEACH NEW YORK METS GAME USED WORN SIGNED JERSEY" is in sale since Tuesday, November 10, 2020. This item is in the category "Sports Mem, Cards & Fan Shop\Game Used Memorabilia\Baseball-MLB\Jerseys".