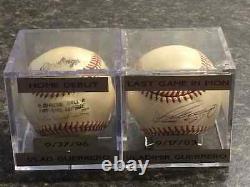 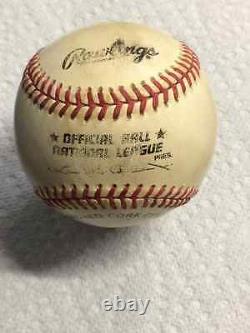 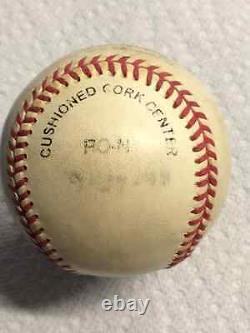 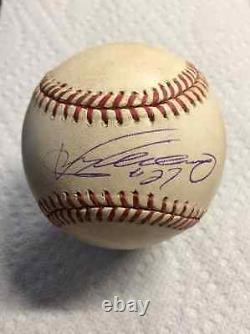 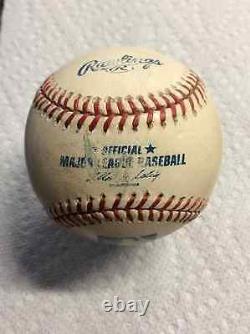 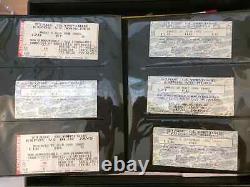 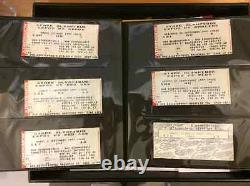 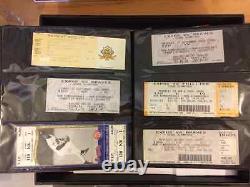 This listing is for two rare Vladimir Guerrero Game Used Expos Baseballs. The first is a game used baseball from 9-27-96 in Montreal. This is when Guerrero made his Home Debut for the Expos. It was against the Atlanta Braves. On one panel, 9-27-96 is written but it's really light and faded.

I actually had to write it in pencil because that's all I could find in the car after the game. I'm not sure why I didn't wait to get home and write it in ink. I unfortunately never had the chance to ask Guerrero to sign this for me. We went to all three games that series as we drove up and stayed the weekend in Montreal. I only live about an hour away so I did that a lot in those days.

I also worked only 40 minutes from Montreal, just on the US side of the border for 15 years so I went to numerous games after work. The second is a game used baseball from 9-17-03 in Montreal. This is when Guerrero made his final appearance in Montreal for the Expos. It was also against the Atlanta Braves. I'm actually a huge Braves fan so I went to a lot of Braves games in Montreal between 1995 and 2004.

I actually went to a lot of games in Montreal even when they weren't playing the Braves. I also was able to ask Guerrero to sign this baseball after the game either in the lobby outside of Olympic Stadium leading to the Metro or outside the stadium where the players would leave from. I've received 100's of autographs over the years in both places as well as at the Sheraton Centers Hotel on Rene Leveque West as that's where I always stayed. It turned out to be the same hotel that players from the opposing team stayed at as well. We usually sat in the VIP section and got to know some of the Expos staff a little so we were able to get foul balls down the line from the ball boy which I believe is how I received the 1996 ball. And because our seats were usually in a good location for foul balls, we also had access to foul balls which is how I obtained the 2003 ball if I remember right. The tickets pictured are not included. That's when I started throwing them in shoeboxes. Over the last few years, I have tried to locate them all and put them in a scrap book. Guerrero is now a Hall Of Famer. I will consider all offers.

Check out my other auctions for more great items. This item is in the category "Sports Mem, Cards & Fan Shop\Game Used Memorabilia\Baseball-MLB\Baseballs". The seller is "jb-sports-plus" and is located in this country: US.